Acidification of the soil is a continuous process on which we could have no influence as farmers.

Acidification is caused by: calcium washing out, acid rain, usage of nitrogen fertilizers or the process of raising calcium together with crops. The correct pH of the soil has a measurable impact on better harvest and lower expenses on mineral fertilization. The first step before entering the field should examination of the soil in the nearest District Agricultural Chemistry Station and determination of its pH rate. The correct reaction for different soils differs according to its agronomic category. Lime spreading best to perform just after the harvest is finished, it means in the autumn. The lime dose should be determined based on the results of our soil analysis. It is most preferable to lime every year in smaller doses.

As a manufacturer of agricultural machinery we have a wide range of machines used for lime spreading.

The series of RCW spreaders have been known among farmers already for over 40 years. The RCW trailed spreaders are universal machines which are used for spreading lime and mineral fertilizer. The wide range of spreaders and different options allows to make even a small machine as a multifunctional and efficient unit that finds its customers among medium sized farms as well as large agricultural holdings and companies providing agricultural services. The newest and the biggest model right now is RCW 120, which is characterized by a large hopper, single-axle chassis, wide tires and sprung shock-absorption of drawbar. 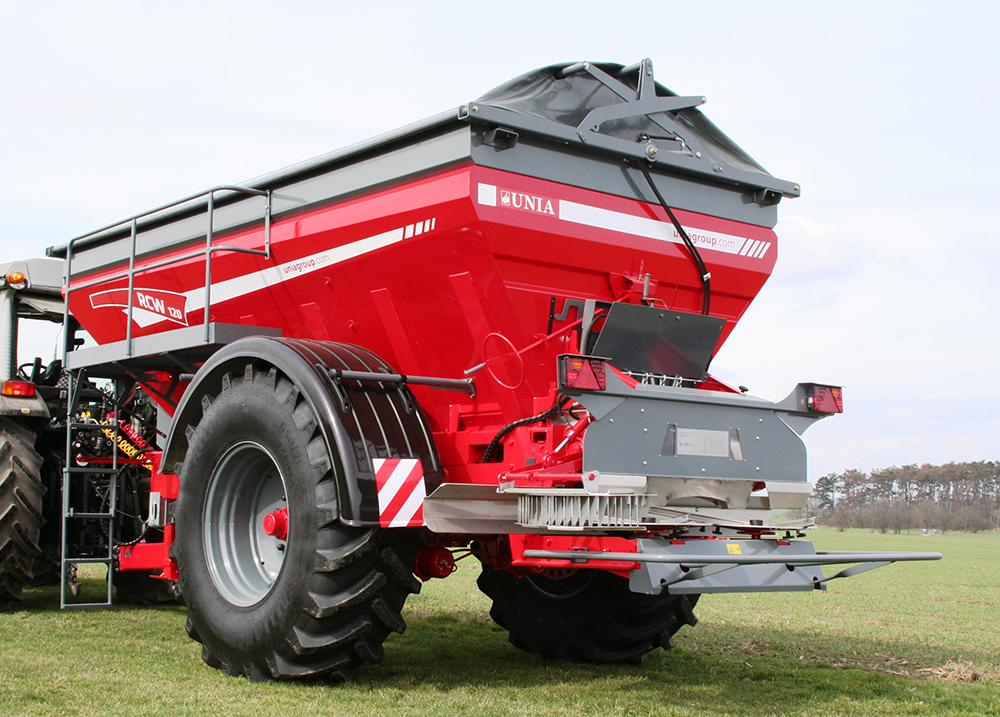 Another way to distribute efficiently lime on large surfaces is to use a manure spreader equipped with a horizontal-&-disk adapter. The biggest model in our offer is TYTAN 36 spreader with horizontal 3-shaft adapter and with spreading discs. The machine has got 3-axle chassis. In order to improve comfort and safety of work the chassis in standard is equipped with 1st and 3d steering axles. Axles has got shock-absorption by means of spring suspension. In standard equipment the bottom drawbar is suspended on the leaf spring. TYTAN 36 has got two floor conveyors that move in parallel to one another. Each conveyor consists of two coil chains connected by scraping strips.

In standard equipment the machine has got a hydraulically lifted tailgate which separates the hopper from the adapter, so that when starting the spreader loaded material does not push on the adapter shafts, allowing for smooth start and even spreading of material from the beginning of operation. During lime spreading the manure load should be reduced by the percentage of closing of the tailgate, e.g. the tailgate is closed halfway, the load capacity of the spreader should be reduced by approx. 35% as the lime while driving on the road/field forms hardly divisible body. Loading of material into the spreader should be performed starting from the rear part to the front of the hopper, as it positively affects the quality of the later spreading process. It is desirable to distribute the spreading material evenly across the entire surface of the spreader hopper