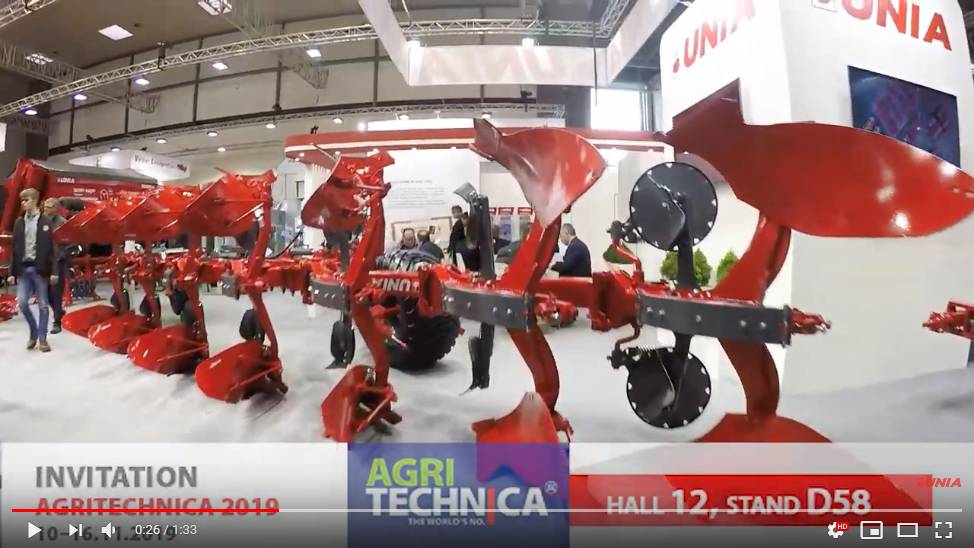 Pulverized lime is gaining in popularity due to its high reactivity, speed of action and attractive prices. In particular, lime supplied by tank cars is characterized by its low price as well as convenience and speed of loading. However, spreading pulverized lime on the field requires special solutions. The specific structure of the fertiliser makes it necessary to spread it over the field surface in such a way as to prevent wind drift. RCW spreader equipped with HELIX beam is a response to the needs of large farms and companies providing agricultural services where pulverized lime is used. The spreader is equipped with many complex solutions that affect comfort, efficiency and quality of work at all its stages from the moment the hopper is loaded. 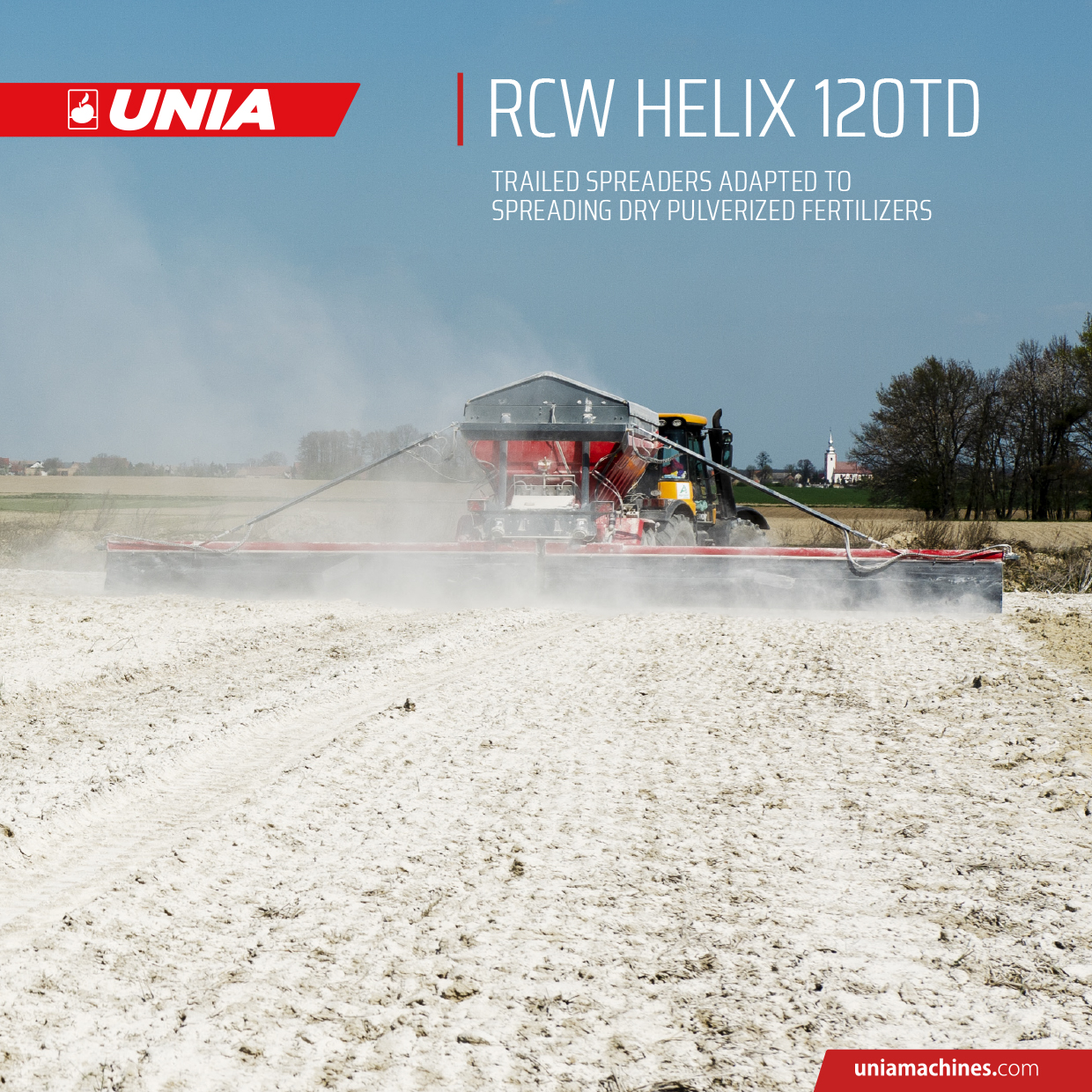 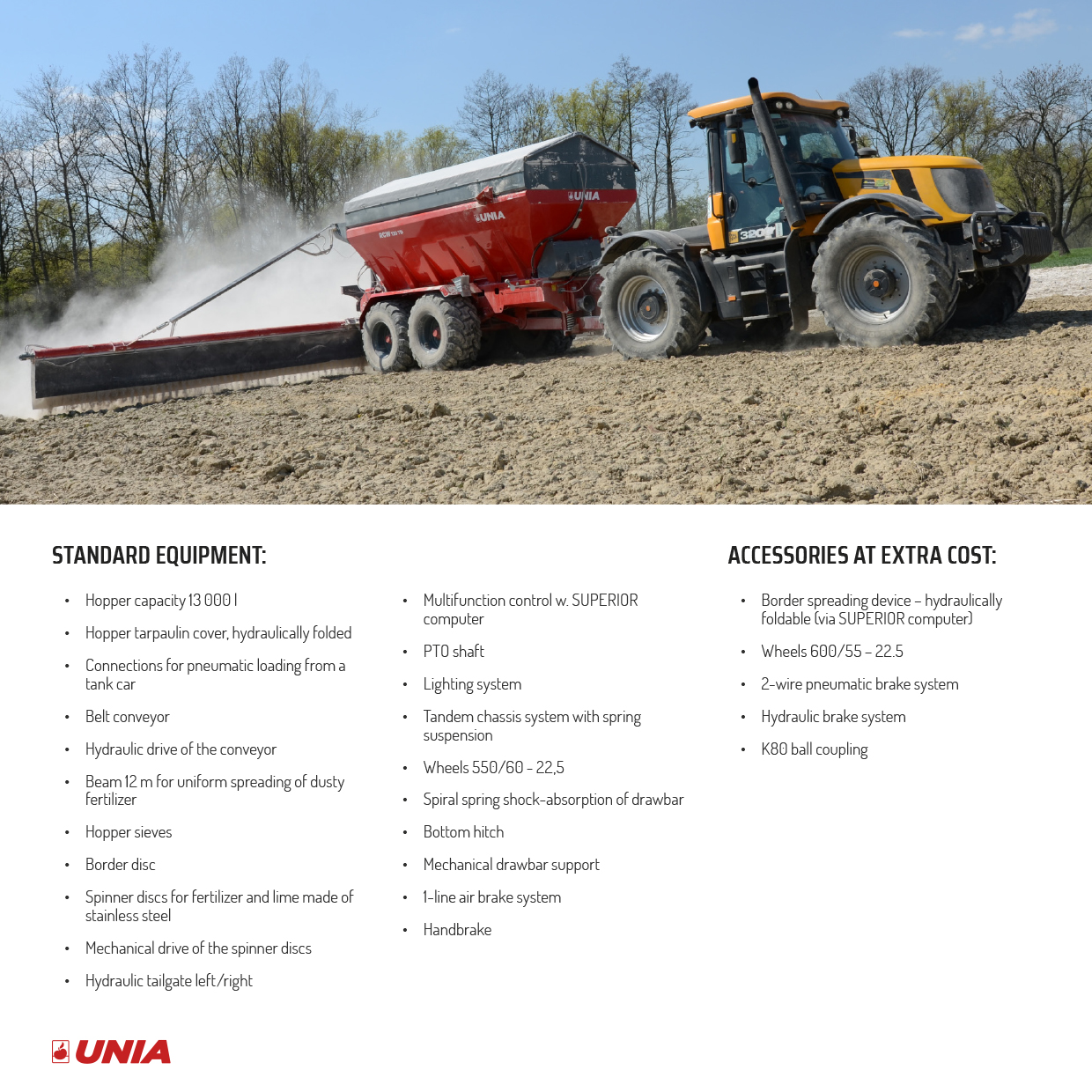 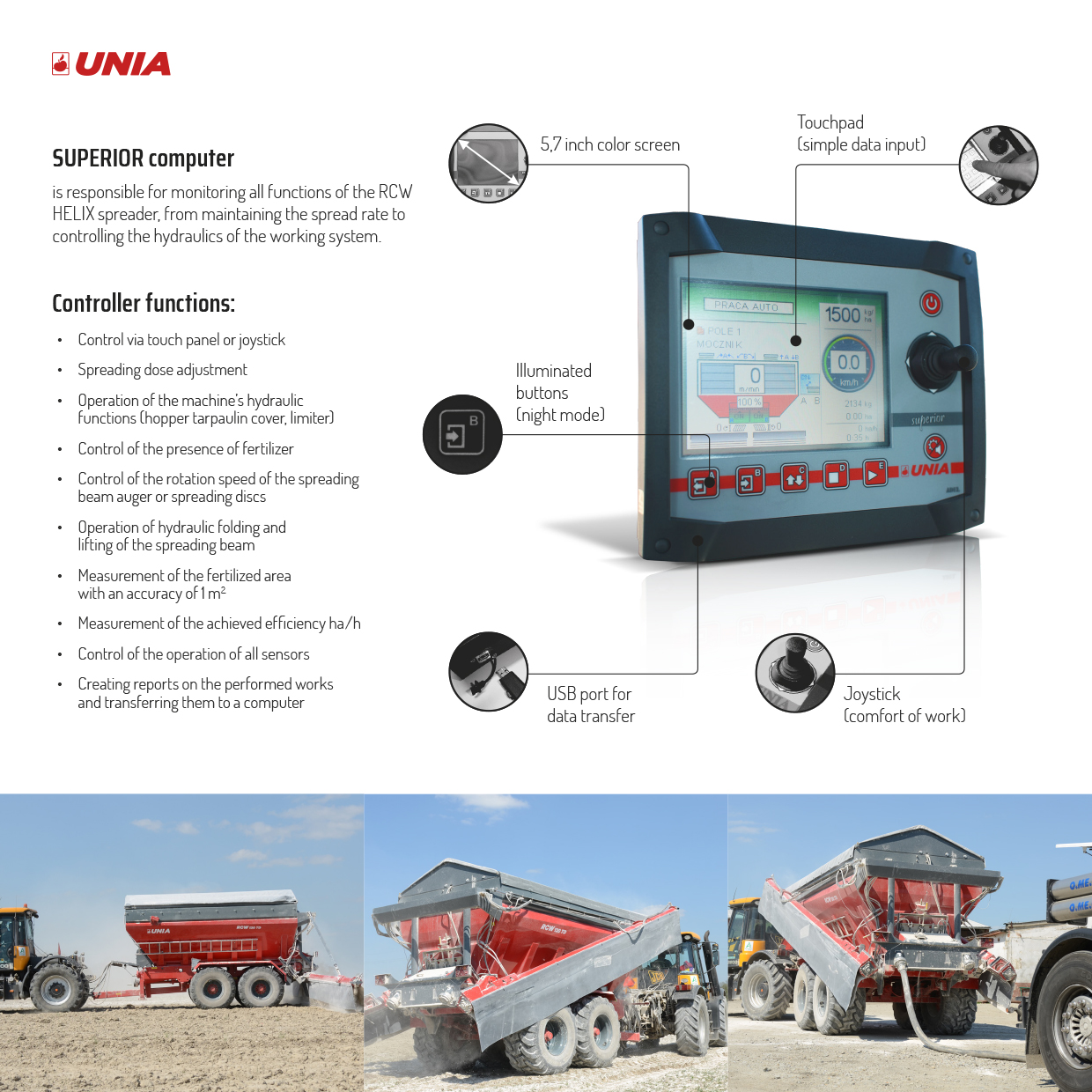 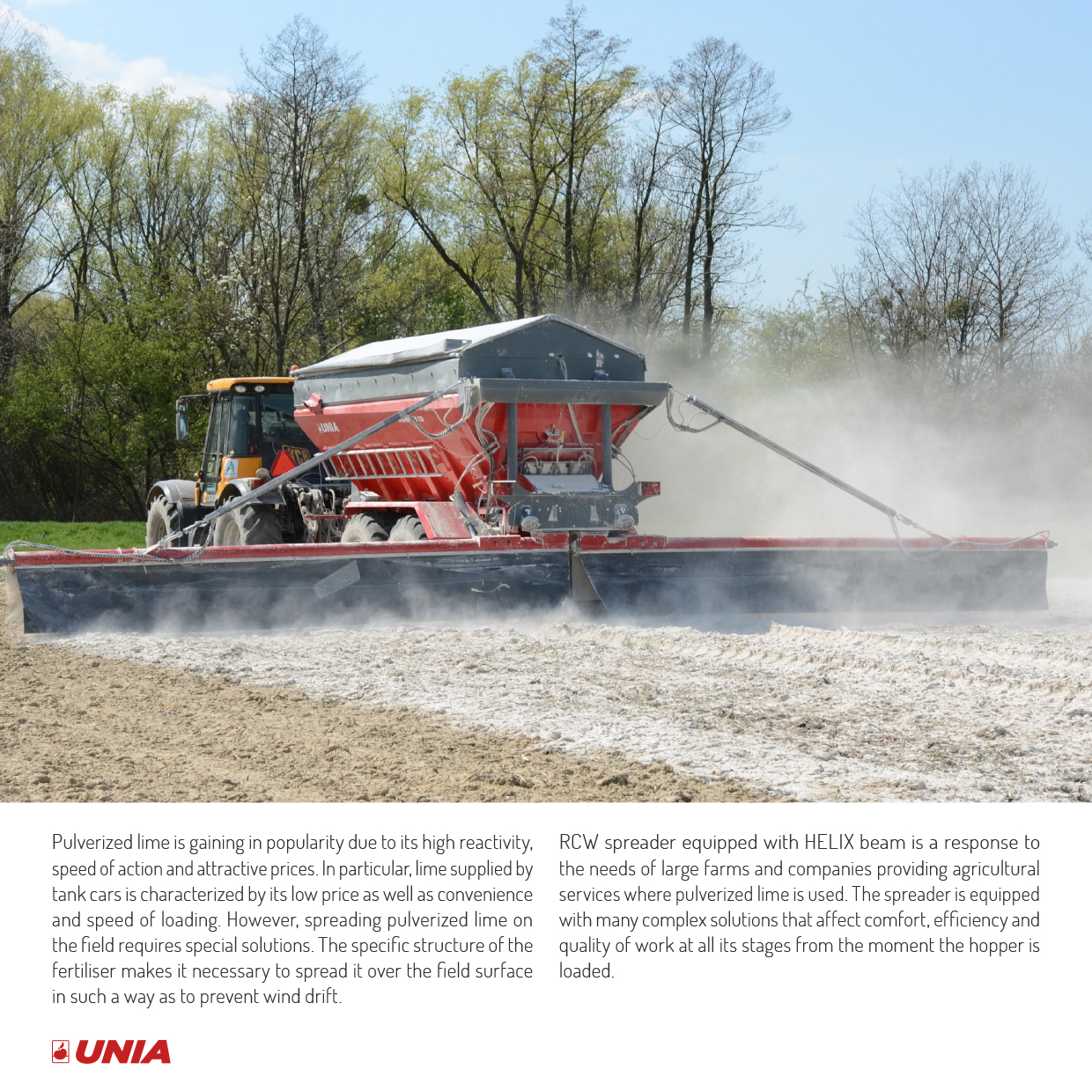 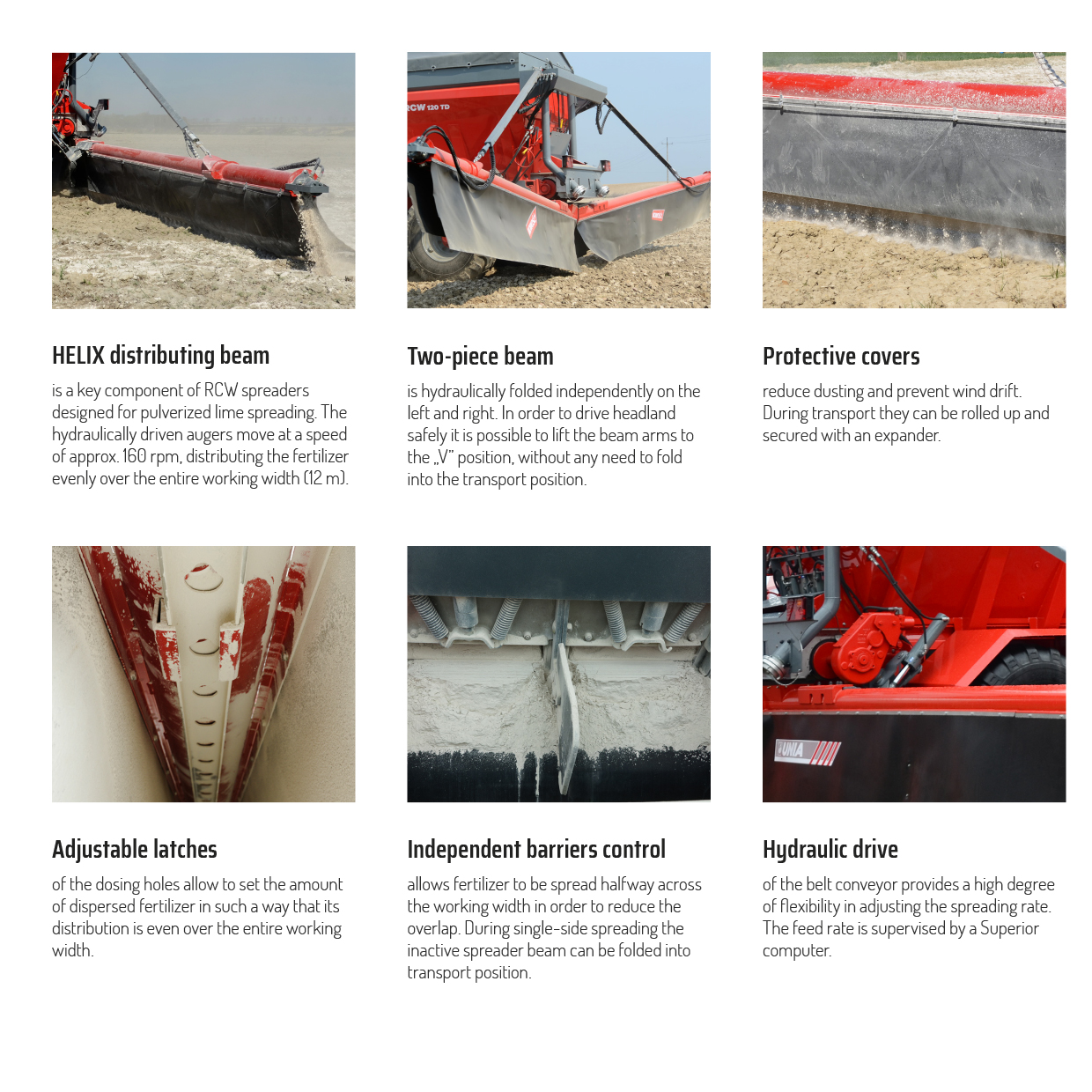 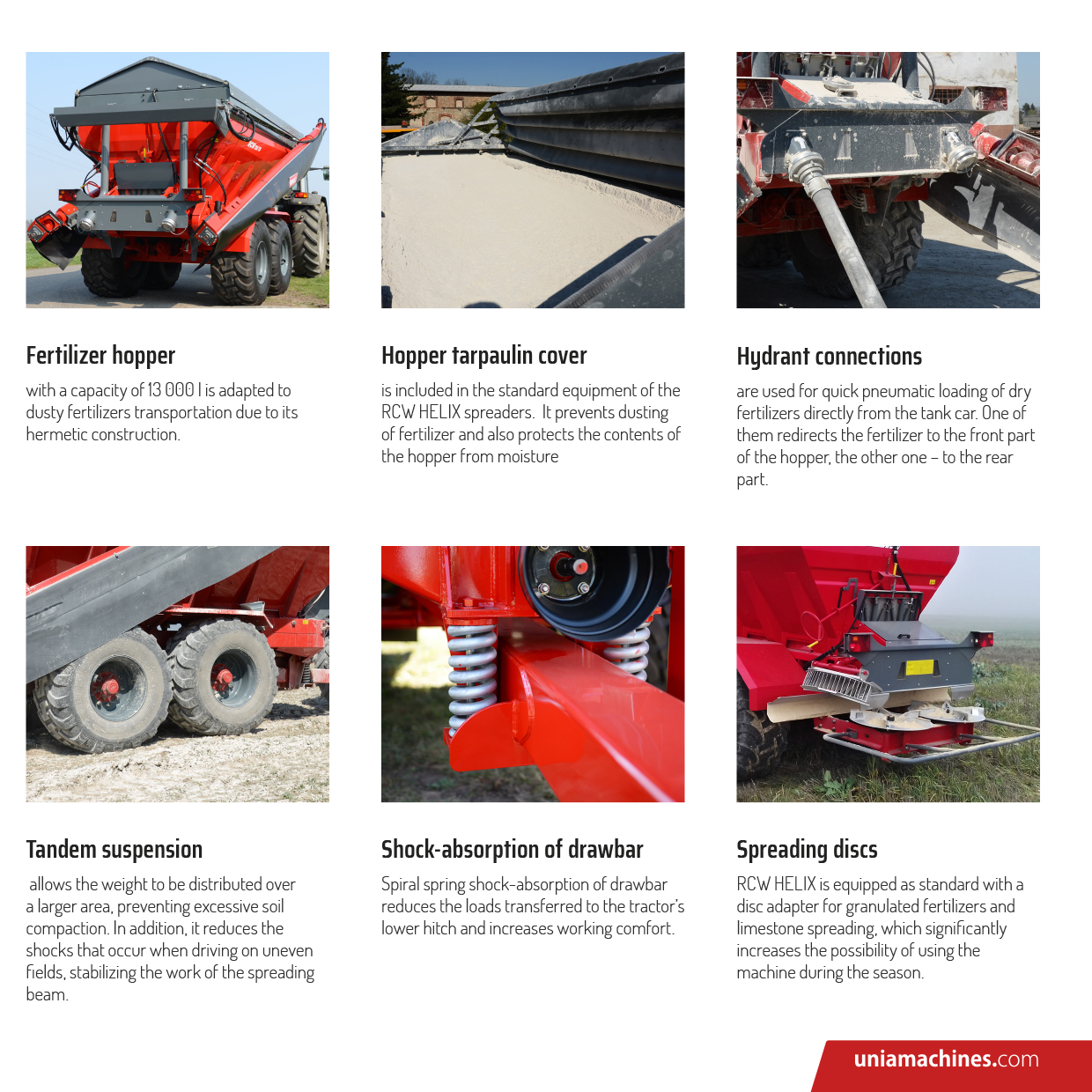 We extend our offer with HDC series workpieces, these are technologically advanced elements with cemented carbide with four times longer working time.

Cemented carbide, in the industry called “WIDIA.”
The term derives from German “wie Diamant,” which means “like a diamond.” It is a tool material obtained by powder metallurgy methods from metals’ carbides.

Minced carbides are compressed
under high temperatures and pressure. Cobalt is the connecting element and carbides also consist of e.g. tungsten, titanium, niobium, chrome and nickel.

By introducing such a technology into our operating elements, we  would like to offer our customers the highest quality and four times longer working time with the lowest possible degree of wear of the operating elements, determined by the conditions and structure of the soil, guaranteeing uniform wear over its entire surface.

Offered in KOS PREMIUM, CROSS, AND CROSS HP cultivators for simplified tillage will be available as an equipment option at an additional charge. We will successively implement it to other machines, such as KOS, HAWK, HARRIER, AND KRET. 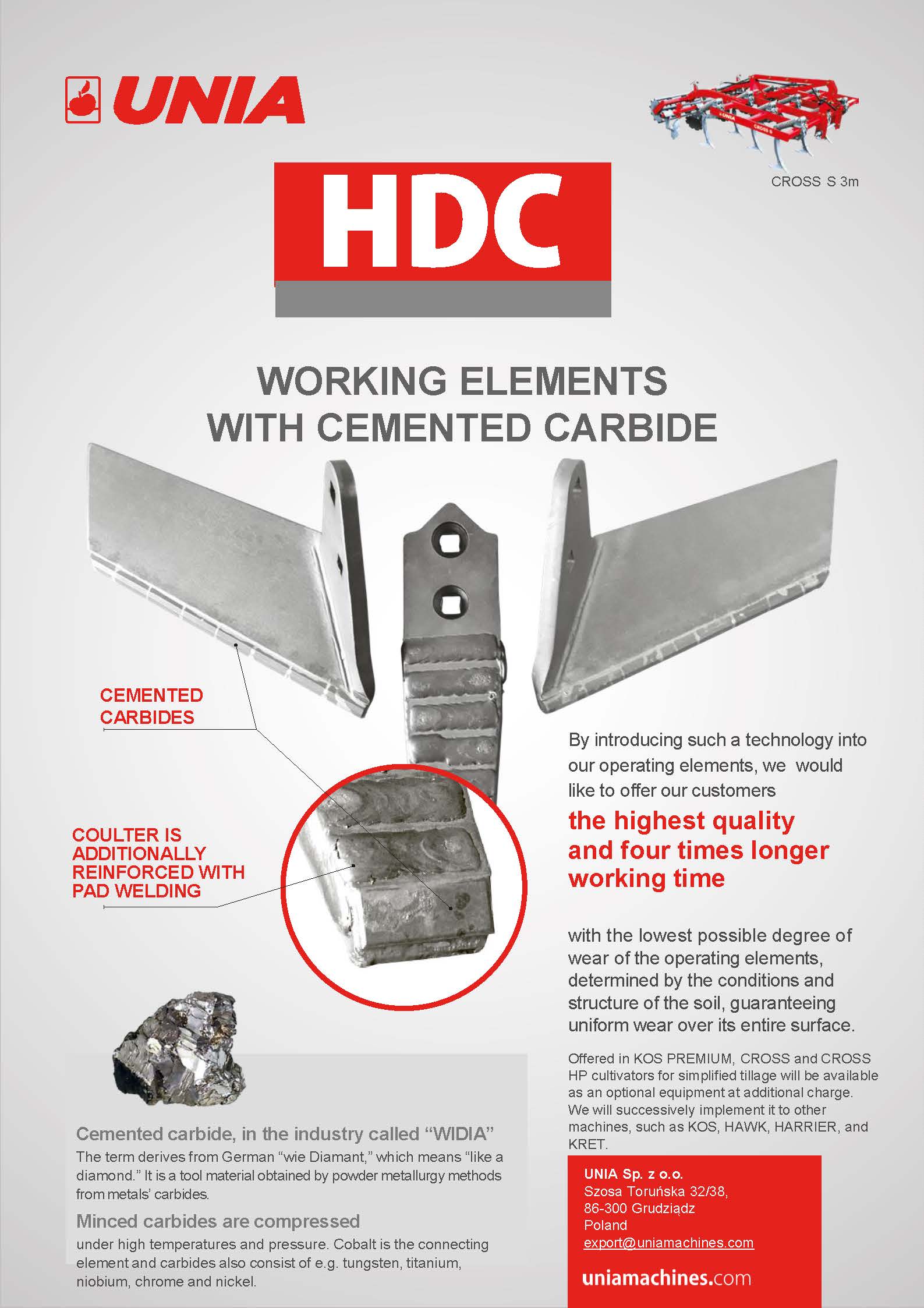 In UNIA factory in Brzeg, the 1000th sprayer of EUROPA model left the production line. In its 19-year history the EUROPA field sprayer has become a flagship product for the protection of plants of UNIA brand - a manufacturer of agricultural machinery operating at international market.

The first piece of EUROPA sprayer was presented at POLAGRA trade fair in 1999 where it was granted with gold medal of the exhibition. It had a model name “2521” manufactured at that time in the PILMET factory in Wroclaw city. The first unit was sold in 2000 year. The machine has been introduced into serial production in 2004 year. These were models with a capacity of 2 500 and 3 000 litres and beam widths of 18, 20, 21 and 24 meters. The sprayer in standard was equipped with the computer of the Italian supplier ARAG, which automatically maintained the set spraying rate l/ha regardless of driving speed. In addition to control of the liquid flow the computer enabled rapid change of spraying parameters and summed up the sprayed area. The display enabled control of driving speed, the dose and the number of switched on sections. The field beam was hydraulically controlled from the tractor cab, based on trapezoidal stabilization with the possibility of its inclination on slopes. On the field beam there was assembled a liquid system made of acid-resistant tubes ended with 4-positional spraying heads. The entire liquid system was powered by pump of 260 l/min efficiency. The main tank was made of polyethylene. As standard equipment there was also a tank for clean water to rinse the entire system.

In 2006 the PILMET factory (in Wroclaw) was incorporated into the UNIA capital group. In 2008 there appeared the second generation of sprayers - EUROPA II. In comparison to previous model the sprayer with capacity of 4 000 l was introduced. The tank has been made of UV-resistant polyester. The sprayer was controlled by ARAG terminal (Italian supplier). The beam stabilization system has been changed: the trapezium has been replaced by a pendulum system. The field beam has been re-designed and there were 27 and 28 meters wide beam offered. The maximum lifting height of the beam has been increased to 2,3 meters. Additional options have been added to a number of features that improve the efficiency and comfort of work, such as independently folded beam which enabled easy bypassing of obstacles on the field. The axle has been equipped with pneumatic axle shock-absorption improving comfort and significantly extending the durability of the machine.

It is the turn of ISOBUS now

The ISOBUS technology was used in EUROPA II sprayers when started cooperation with Muller Elektronik company. The ISOBUS system enables the operation of various machines using the display of one console. In this case there is no need to mount additional terminals in the tractor cab, no unnecessary wiring and additional displays limiting the operator view from the tractor cab.
All this undoubtedly affects the comfort of work and has the economic effect. The offer has been extended with new UTS terminals with a colour display (UNIA TERMINAL SYSTEM). The new terminal has enabled the application of a number of new solutions, among others an automatic turnable drawbar or the DYSTANS CONTROL system which automatically keeps the set beam height relative to the ground or crops via the two ultrasonic sensors. In 2014 year there was introduced the EDS system in EUROPA sprayers, which on the basis of a GPS signal can turn on or turn off a single spraying nozzle at the right time, so that you can get higher accuracy of spraying and savings, where overlays and skips are reduced to minimum.

This is a new age.

In 2011 a new model in the range of field sprayers has appeared. It was EUROPA PREMIUM comprising two types with 4 200 and 5 800 litres of main tank capacity. The tank is designed and installed in special way to provide a low centre of gravity for the entire machine.
Characteristic feature of EUROPA PREMIUM sprayer is the lateral positioning of tanks for clean water. The offered width of field beams: from 24 up to 36 meters. The largest UNIA sprayer is equipped in standard with a braked and pneumatically shock-absorbed axle. Upon request the version with steering wheels is available with the system of automatic copying of tractor traces using a gyroscope. The UTS terminal controls all spraying functions, beam hydraulics and axle turning

EUROPA XL – leader on the market

The third generation of EUROPA sprayers it is EUROPA XL model, which first prototype was produced in 2014. After tests during one year the current version of the sprayer has appeared, characterized by the lowest drive clearance (height) in its class. The parallelogram system has been re-designed in relation to previous models. In the XL model the beam is lifted by means of two hydraulic cylinders. A completely new beam has been designed with a trapezoidal cross-section of the construction consisting of two bent flat bars joined by a double truss. The beam depending on the working width can be folded by two or three sections (possibility of working width reduction). This is a big advantage and a convenience for farmers who have fields of various widths.
Thanks to the new beam construction 30 m working width has been achieved. In the era of environmental protection, in EUROPA sprayers there are used pro-ecological solutions such as last nozzles limiting spraying angle of the extreme nozzle. Such a mechanism is applied during spraying within buffer zones or water reservoirs.
In EUROPA sprayers it is possible to use a pneumatically controlled liquid circulation system. Such solution eliminates the formation of sediment inside the pipes of the liquid system. The operator immediately after turning the sprayer on has a full even pressure over the entire working width of the beam.
In 2017 year the colours of the sprayer were changed. It is a kind of return to the tradition of the Wroclaw factory combined with modern UNIA technical solutions.

Next year UNIA brand will celebrate the 20th anniversary of EUROPA model, so it will be continued ...